Once I base these I'll take some snap shots. I have a lot to base. Most of these are Austrian and Russian 15mm Napoleonic. 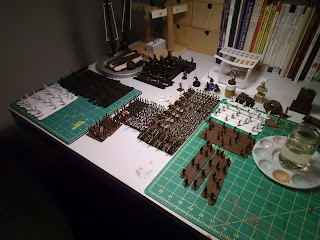 This is a Paul Hicks Charity figure I bought a while ago from Steve Dean's website.  http://www.steve-dean.co.uk/
All proceeds went to British Army Benevolent Fund which supports retired British soldiers and family members. Least I could do for my brothers in arms. I'm still tinkering with him. He represents an officer to the Gloucestershire at the battle of Alexandria in 1805. 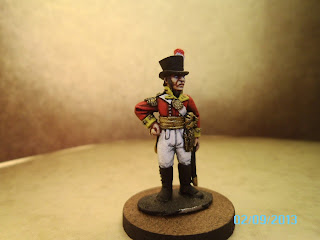 It took forever to get to it, but only took a weekend to build. I'm pretty happy with it. Wife asked me to paint it which I did. I painted it black, like the song says! I'll follow up later with the painted pictures when I get some terrain done, for the time being though, here it is in bare wood! Its 4x8 with a flip-up end tray for rolling dice, rule books, drinks etc.. Ample storage underneath. May add a book shelf under neath but that will come later. Looks cramped now but will move it to where I'm taking the pic from for gaming. 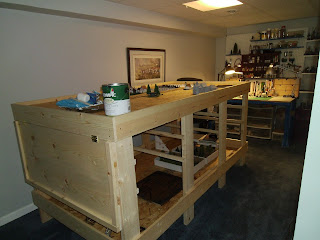 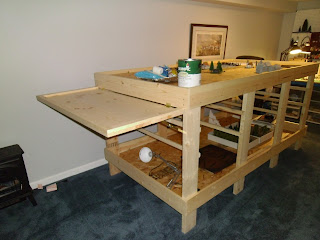 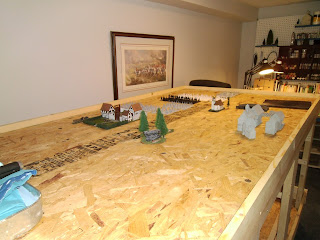 Email ThisBlogThis!Share to TwitterShare to FacebookShare to Pinterest
Labels: Terrain

On posting to the page but not in wargaming. Have completed my wargame table. Pictures soon as I get my laptop back up and running. Have completed a boat load of 15mm Napoleonics which include Blue Moon, Old Glory and have re-based a lot of my old Minfigs to a better basing convention and have touched up thier paint jobs. I still have a lot to do. Terrain boards coming soon, more 15mm Napoleonics,(Blue Moon and Old Glory mainly), re-base more Minifigs, 28mm Saxons, 15mm terrain peices to include a small village. I also bought a ton of 28mm EIRs and have painted one as a test figure. I'll post a picture of that too.I have decided to be more disciplined and try to finish one project before moving on to the next. Will see how that goes in 2013.
Posted by ljr70 at 1:06 PM No comments: